— From Robin Marty’s interview in Care2:

“With reproductive rights becoming alarmingly endangered through recent legislative measures on both state and federal levels, it makes sense to commit ourselves to remembering where we started and how far we have come. That’s one of the goals behind the “Reproductive Justice Walking Tour,” a project of Words of Choice, a pro-choice theater group out of New York City….

I spoke with Cindy Cooper, executive director of Words of Choice, to learn more about the tour and and its goals for raising awareness of the recent history of and current battles involving reproductive rights.

Why did you decide on a walking tour and interactive performance? How do you think this will impact an audience in the way that an article or documentary wouldn‘t?

The Reproductive Justice Walking Tour gets people on their feet and into a new groove: it gives them an opportunity to look at their communities in a new way. Our interactive performances add an extra level of context and engagement: it’s fun to happen upon a performer who will entertain you. It’s also a way of bringing people together in a group, so they can share experiences, walk and talk – and tweet (#ReproJWalk). 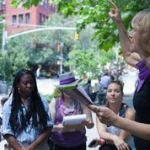 We were careful to book a place after the walking tour where people can gather and share experiences. They can also engage in more activities that bring in events around the country (for example, live phone calls to abortion counselors who are participating from other locations), information about our abortion access fund, a book signing or look over some of the archival books and buttons on the topic to recall our rich history.

I love all forms of engagement, and articles and documentaries are important, too. People respond to different stimuli, so I think we need to consider every way possible to motivate and engage. The arts have a special way of speaking to people by opening their minds, and allowing people to quietly consider and reconsider their own experiences, memories and thoughts. Theater, in particular, offers possibilities of change and transformation by presenting vicarious experiences and moments of reflection. Most successful social justice movements have had a vibrant arts component – the Free Southern Theater started by John O’Neal (now carried on by Junebug Theater in New Orleans) is but one example. As some of the movement for reproductive justice became centered in institutions and nonprofit organizations, the use of the arts has waned and fact sheets took their place. But people need to be engaged in their hearts and minds, and that’s what theater and the arts can do. 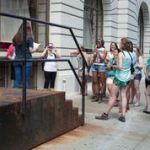 Why did you pick the anniversary of Griswold for your tour date, and do you think we‘re in danger of going all the way back to the days of birth control being illegal?

Griswold was a pioneering case on its articulation of the right to privacy, as well as saying that birth control couldn’t be illegal (for married people, later extended to all). And, in 1965, that was essential to the other personal rights that now fall under the right of privacy – Roe v Wade in 1973 on abortion and also, lesser noted, Lawrence v Texas in 2003, which struck down anti-gay laws making sodomy a crime. So if one combusts, the others could, as well.

The right-wing attacks on birth control – calling Sandra Fluke a “slut” for suggesting that law students needed contraception, for example – have become outrageous in the past few years. People who follow the abortion debate closely knew that fury at women’s sexuality and freedom was a key driver of that debate, and contraception was next on the list – whether by shaming or illegality. At the time, mainstream commentators and the wider populous poo-pooed that notion, but now it’s become manifest. The reproductive justice movement can connect the dots, and now’s a pretty good time to get out and reclaim bodily integrity.

To be completely honest, the real reason we selected Griswold comes down to this. It’s a symbol of the fight for reproductive justice and women’s liberation – and the weather might be nice, too! 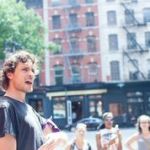 What sort of conversations do you think we need to be having about reproductive justice that aren‘t happening in the public sphere right now, and how do you feel Words of Choice and other similar projects can address those?

All sorts of conversations need to be happening. The Reproductive Justice Walking Tour and Words of Choice approach these topics in a way that speaks to people’s imaginations of possibilities. It’s less lecture-y, and less threatening and intimidating. We aim to open up new conversations and to engage people emotionally, as well as intellectually. Then the activism can begin.

But having traveled across half the country with Words of Choice, one very important and overlooked factor is that the progressive community, and the reproductive justice community in particular, has few places to gather. The right-wing gathers in conservative churches – and they are on every block. Or they use so-called “crisis pregnancy centers” or, with the vast funding that right wing capitalists have poured into the anti-abortion movement, vans and trucks and mobile units. What we do is we gather people in a place where they can be in communion with one another and feel supported and uplifted. Too often, our own powerful base is overlooked as “preaching to the choir.” We’re not preaching – we are reinforcing and mobilizing them. They are eager to experience that and to have new opportunities to do so.

New York City has obviously been an epicenter for the movement. Are there cities that you could see that also would make great tour sites that people wouldn‘t normally think of, and why those cities?

We really hope to use the Reproductive Justice Walking Tour as a prototype for other cities and locations. 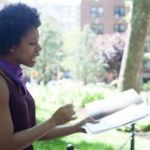 Virtually every city has tour sites if you think broadly and expansively. Reproductive justice issues are all around us, so it’s natural. For example, drugstores are everywhere, and hundreds of products for women’s care, babies’ needs are sold in them, as well as pregnancy tests, condoms and emergency contraception (we hope). Hospitals are everywhere with their maternity wards (we talk about the high maternal mortality in the U.S.) and emergency care for rape cases, or questions about hospital takeovers or service provisions for women’s needs. Gardens are everywhere – and we use one to remind people about the herbs that women used (and still do use) to try to control their fertility and “bring on” menses. Courts are everywhere with their cases of abortion access or provision (Texas, Georgia are top of the list), and cases of clinic challenges or protester challenges, current cases on allegations of using drugs while pregnant (hello, South Carolina! Wisconsin! Oklahoma!). Statehouses are everywhere. Anthony Comstock, the moralist crusader who presaged our current right wing, arrested people all over the country, sometimes for sending something in the mail. So even a post office is a site.

Margaret Sanger and Emma Goldman – both arrested for speaking about birth control – gave hundreds of talks at locations across the nation, as did Flo Kennedy, the African American lawyer who handled the first case challenging abortion laws in New York. There were located in our geography.

And then there are more specific sites. New York has the original site of Trojan condoms, but there were condom makers in St. Louis and Cleveland – where, in fact, today you have the Contraception Museum. Jane, of course, was in Chicago, but abortion providers who served women extra-legally (that is, outside the law) were everywhere – Portland, Oregon, Washington, DC.

This is only a slim list of the topics reproductive justice addresses. People who have had experiences live everywhere. It’s a matter of opening up our minds and our thinking. Part of the fun is actually thinking about it and doing the research. Maybe a national tour is next! 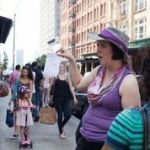